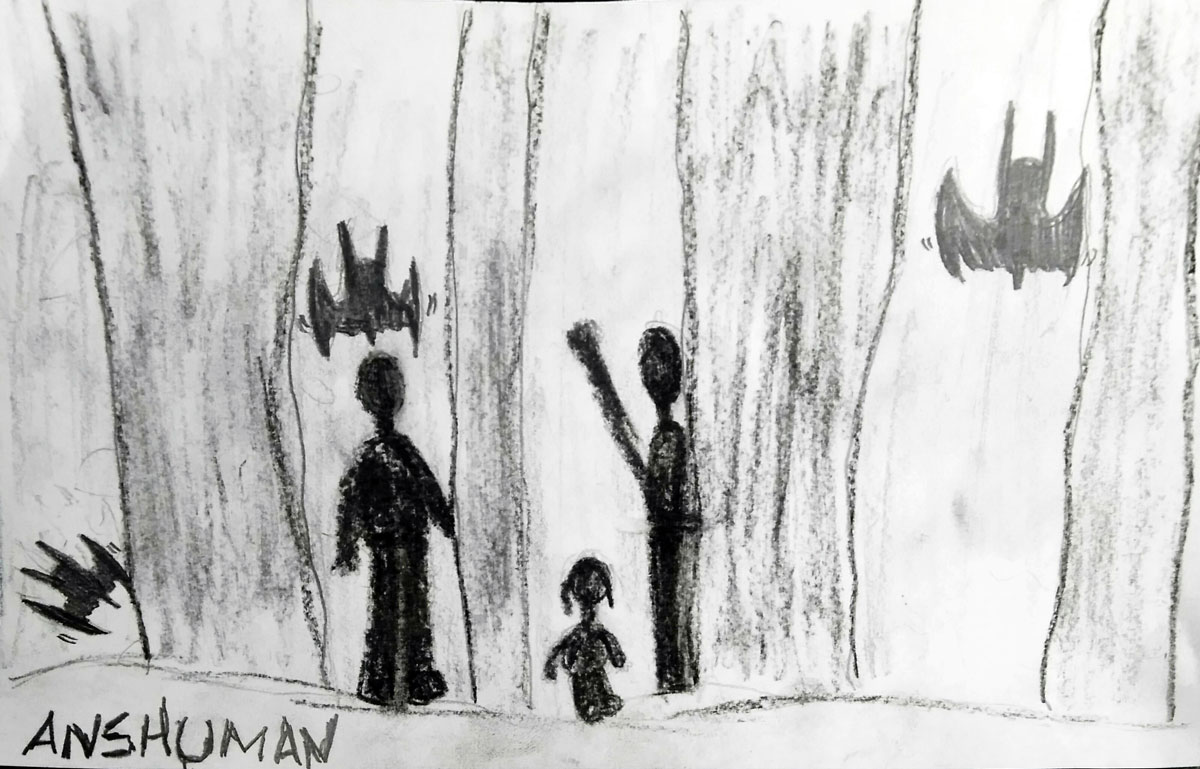 As night approached and all the birds retired to their nests, Jamie, all snug in the warm, cosy blanket of his bed, heard something very strange. It sounded like an “Aaaaaaaaaaaaaaaooooooooeeeeeeeeaaaaaaaaaahhhhh!” It seemed like nothing he would have expected in his friendly neighbourhood. Even all the animals he saw in his neighbourhood did not make that noise. “Eh,” he thought. “Must be a wolf in the forest nearby.” He went to sleep.

Jamie woke up at 9 the next morning. His mom, with eyes at the back of her head, shouted, “Good morning, Sweetheart!” “Brush your teeth and come for breakfast! It’s your favourite, pancakes with maple syrup!” Jamie groaned. “Why brush,” he thought. Let us do something meaningful. With that, he came up with an idea. He wanted to prank his little sister, Embry. He took a full bottle of Coca-Cola, added some sharp pieces of cement into it, and then mixed it with some horrible-tasting mentos. The mixture became fizzy, and Jamie tried his best to close the cap as fast as he could, before the Coca-Cola exploded. He left the bottle in his bedroom. He wanted to prank Embry when his parents were not there.

He went out of his bedroom. “Hey mom, hey dad,” he said without a smile on his face. He was too interested in his pancakes and his prank which made him smirk. Embry looked at the evil smile on his face, “What are you up to now?!”. “Nothing,” Jamie replied. “Just eat your breakfast.” “Mmm, delicious!” Jamie took another bite of the pancake. “Aaaaaaaaaaaaaaaooooooooeeeeeeeeaaaaaaaaaahhhhh!” That sound again! Since mom and dad were washing the dishes from the previous night, and there was a lot of metal clanking together, they could not hear anything, but Jamie and Embry could. “What’s that,” asked curious little Embry. “I don’t know,” said Jamie. “Do you want to investigate?” “Sure, but it’s our playdate today,” said Embry. “I do not want to miss that!”

“Okay, then we’ll make our playdate a little different today!” “Mom, Dad, can we go to our Jake’s house now,” Jamie asked, trying to hide the smile on his face. “Sure kiddo, but pack your pancakes in case you get hungry.”

Jamie and Embry set off. Jamie hid the Coca-Cola bottle in his backpack. “Maybe I can prank Embry on the way.” They first went to their friend’s house, which was two houses opposite his. Jamie inspected some small animals on the way, like a squirrel, a few ants and a rat. Jamie highly doubted any of these animals made that scary noise. Embry thought he was acting silly, as she did not know what he was up to. When they reached their friend’s house, they went into his room, and locked the door. Jamie gave Embry a few Lego bricks to build and play with. Without even greeting Jake, Jamie started up, “Have you heard any weird sounds off lately. We have!” Jake replied, “Well, yeah, everyone has. I have no idea where these sounds come from. Do you want to find out?” “Yeah! That is exactly why I came here,” Jamie said enthusiastically. “So, you in?” “Of course! Let’s do this,” said Jake.

Jamie and Jake knew that nothing in their neighbourhood could make that noise…maybe there was something in the forest nearby? They decided to take a plunge and move on. ‘Come on Embry, let’s go,” Jamie said. And so, they set off for the forest.

When they finally reached the forest after walking for an hour, Embry said, “I want to rest!” “Jamie snapped back, “Fine! We’ll rest! Let’s have pancakes!” After having a break for 15-20 minutes, they started to explore the forest.

They spotted several animals, like a moose, white-tailed deer, hedgehog, koala, bison and of course, a few beetles and bats. Jake carried an animal fact file that gave the sounds of animals. None of these animals made that strange noise. After 40 minutes of finding absolutely nothing at all, Jake said disappointedly, “Let’s go home. We’ve found nothing! There’s no point doing this.” “No,” Jamie replied. “We are still going to find that creature.” Jake sighed. “Why did I ever sign up for this? he thought. “I want water,” Embry demanded. Jamie smirked again. Maybe it was time to prank Embry. He gave her the bottle of Coca-Cola that he had picked up at the beginning of his little adventure. Embry almost finished opening the cap of the bottle when they heard rustling. “What’s that,” asked Embry with a very frightened look on her face, shaking the bottle. The more Embry shook the bottle, the fizzier the Coca-Cola became. Suddenly, a creature popped out of the bushes, with a log of wood in its hand. It was huge, and there was gooey and slimy saliva coming out of the creature’s mouth. Its hands were stained with blood, which led Jake to think that it had eaten recently. The creature indeed looked ugly and the scariest thing in the world. Jamie thought he was going to attack them. He never knew it was an ogre. He just thought it was a wild animal! “Don’t move a muscle,” he whispered. Embry was not listening. She was too busy staring open-mouthed at the ogre and trembling at the same time. She did not even notice how fizzy the Coca-Cola had become. Just when the ogre was going to attack the three kids, the Coca-Cola bust out of the loose cap like a delinquent getting out of jail, straight at the ogre at full speed. When it hit him, it knocked him out cold, and the cement pieces that were in there, pinched the ogre like stack of needles. The ogre let out a shriek cry. After a few moments of silence, thud! The ogre fell to the ground. Jamie said, “You mean that’s it! All we had to do was fire the Coca-Cola at him! Ugh . . . Embry got to be the hero for this one.”

The trio went out of the forest effervescently, giggling and babbling all the way to the neighbourhood, being so proud of themselves.