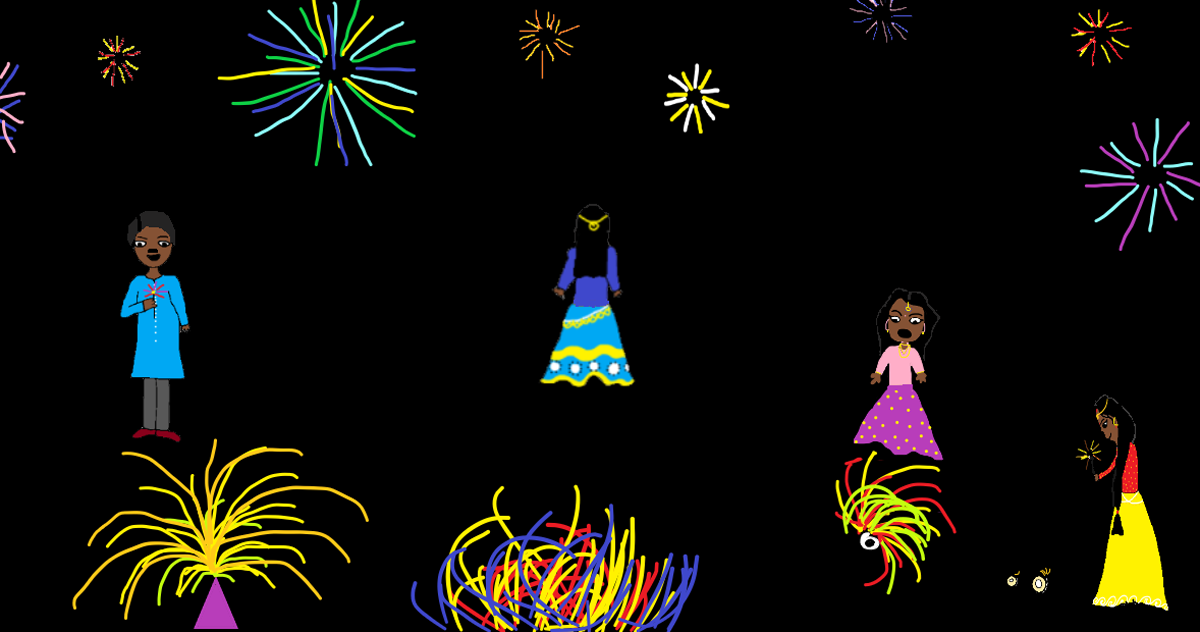 “I watched the kids on the playground, my face stuck to the window. Will they be friendly? Will I make friends quickly?” I wondered. I stared at them until the car descended to the underground parking.

“Deepa, can you hold Nalin’s hand while I carry Arjun?” Mumma Opened the door to pick up my youngest brother.

I took Nalin’s hand in mine. He looked around the dimly lit car park and then patted his cheek loudly.

“Hey Nalin, remember I showed you pictures of our new house? This is the car park. We’ll go up the lift to our flat.” Papa gave Nalin’s other hand a tight squeeze.

He brought the bags out quickly and showed a card to the guard at the door. Then the five of us walked to the lift.

“Go ahead, Nalin. You push the button,” I pointed. My brother looked at me from the corner of his eyes. Then his hand shot out and pushed the lift button.

“Nnnnnn,” Nalin hummed happily as we rose with the lift.

As soon as we entered the house, I ran to my room and opened the windows. The breeze blew the curtains in my face. Somewhere in the house, doors opened and shut. Nalin must be looking through the house too.

“Oh, I hope the kids will make friends here.” That was Mumma. She must have known what was worrying me.

We have moved because Papa changed his job. That means we’ll live in a new city, in a new house. I will go to a new school and so will Nalin. Mumma works from home, so she has the same job. Arjun is not yet 3. I had to leave my best friend behind when we moved; my only friend!

That evening I went down to the playground. A group of kids was playing cricket. Others were on the swing and monkey bars. I went up to a girl who was playing in the sand.

She looked up, sand pouring down between her fingers.

I sat down next to her, and we made pretty flowers, then fish, then more animals.

The playground was a busy place. Aunties and Uncles walked around for their evening walks. The grandmas were all in one group, waving their hands and laughing loudly. Somebody had a newspaper, and several grandpas were talking and shaking their heads.

Just then, Mumma came down with Nalin, carrying a bag. They were off to the shop. Nalin kept patting his cheek and shaking his hands.

The girl looked at Nalin, her eyebrows twitching. Was it a little quieter suddenly? Or was I imagining it? I didn’t say anything.

We went back to drawing animals with the sand.

That night, after dinner, Mummaa and I sat on the swing in the hall. I put my head on her lap. Arjun came and put her pallu on his face. “You and Nalin will start school after the Dussehra holidays,” Mumma spoke softly.

“I don’t want to go to the new school. I don’t know anyone there,” I heard my voice shake.

“We will help you make friends. Okay? Maybe we’ll invite the kids to play with you at home. How about that?” Papa pulled up a chair and sat across from us.

“So they will meet Nalin, make fun of him and all of us. They’ll tell the whole school, and then others will come up and ask me stupid questions!” I said bitterly.

“Then we have to find someone who doesn’t make fun of him or us. It is more work, but we’ll keep trying.”

I know I was unfair. It was not Nalin’s fault, but I hate it when I have to explain anything about him to others. I didn’t want to hurt my parents either, but it is not easy explaining things to people who won’t understand.

Every evening, I found my way to the playground. Sometimes I took Arjun, but Nalin didn’t come with me. Papa said, “Deepa, we’ll bring him down to the playground. It’ll be better if one of us is there with him, at least in the beginning,” Papa had reassured me. I met the group who loved to ride their bikes, the dance club members, the chess players, the badminton teams. It was fun, but I had a feeling that I was waiting for something.

Mumma and Papa, Nalin, and Arjun began to join us at the playground. When Mumma joined the aunties, Papa played with my brothers. They brought their favourite toy bus with them, and they played near the sandpit. One day, Papa drove a toy car for Arjun, and they raced Nalin and his bus. Nalin moved his bus and ran it over the saree pallu that was on the sand. A group of grandmas was sitting there. One of them stood up, waving her hands, and yelled, “Hey, what are you doing, child?”

Everyone’s eyes were upon us. “Why doesn’t Papa ever get bothered by their stares?” I thought as my father walked over to my brother, held him, and rocked with him. Papa calmed Nalin down and then walked him to the lift. Mumma had Arjun, and I joined them, not wanting to answer anyone’s questions.

The next day, I started school. My stomach felt like it had butterflies along with millions of eggs and larvae. “You joined a new school in the middle of the school year!” a teacher commented. As if I didn’t know how difficult that was!

That evening, I was in two minds about going to the playground. But Ma was at the door with the boys, and I decided to join them. Down we went by the lift and on the path to the playground when we stopped! There were many kids getting the firecrackers ready.

“Oh no! That won’t do!” Amma stopped, holding Nalin’s hand tightly. “Can you burst the crackers in a different place? The loud noise really bothers him,” I thought she asked them too nicely. The boys looked undecided. I could see they wanted to burst those crackers but were too polite to be rude to my mother.

“If your son can’t tolerate the noise, you shouldn’t bring him here!” a fussy old man shook his walking stick. “It is normal for children to want to have fun during Diwali. You should take your son somewhere else.”

Another auntie came up behind him, “My dear; he is an old man…very straightforward. He has no ill-feeling towards your son.  You must see that  it is not fair to expect other children not to have fun because your child can’t handle the noise.”

“I didn’t say that they shouldn’t burst firecrackers. I asked if they could burst it elsewhere, away from this path. That’s all.” Mumma sounded like she was holding on to something inside her. A different aunty invited her over, but her heart was not in it. So we went back home.

Later that night, she poured her heart out. “That old man was not straightforward. He was rude and cruel. What does she mean, he has no ill-feeling? If that wasn’t ill-feeling, what is?”

“I will talk to the secretary of the society. Though I don’t know how we can manage the day leading up to Diwali. Even the noise-canceling headphones will not work completely,” Papa sighed.

The next evening, we descended a little earlier to avoid all the other kids. Nalin wore his headphones on. Mumma looked like she was so happy! “Ma, why are you excited? What happened?” I bombarded her with questions.

“Shhh! You think I’m going to let these people know how much that man’s behaviour bothered me? Certainly not!”

I went to the sandpit and made some designs. It was very soothing to feel the sand run through my fingers. The sandpit girl came and joined me. Slowly I noticed that more kids were around us.

“Hey, what’s wrong with your brother, eh? Is he mental?” The questions started. I glared at the boy who asked me that.

I stood up abruptly, not caring where the sand flew, turned on my heels, and marched away.

Our society had a large community hall. The chess team was in one corner of the hall. I made my way there to watch the play. One of the other kids there looked like she recognized me. “Your mother was the one who said not to burst crackers, right? Ya, because of your brother….”

“Does nobody ever listen to what people say?” I wondered. I walked back to my building, my eyes like daggers.

“Hey, be careful. She may not like the noise!” I heard laughter around me. The same kids from yesterday stood there with firecrackers. I stood there silent and numb.

Then suddenly,  a little whirlwind came running and stood between the kids and me. My brother, Arjun, my not yet three-year-old brother, Arjun, waved and pointed at the bigger kids, stomping and protesting. His words were not even clear to anyone, but there was no doubt about what he was saying. Arjun was scolding the big kids for teasing me!

We just stood there listening to him. And then, as if shocked at his own daring, he turned to me, his eyes filled with tears.

I went down on my knees and hugged him. Then I took his little hand in mine and walked home proudly.

I knew what I had to do. Nalin needed me just I had needed Arjun. What does it matter what people say or think about him?

I think I’ll start by talking to the kids and see if they will join me in getting a different place for the firecrackers. I think kids will be more understanding than grown-ups. Diwali is not only about firecrackers. We can always light diyas, make Akash kandils and draw rangoli. I may have to explain that there is no such thing as being ‘mental,’ but that’s okay. I’ll start by asking the sandpit girl her name!