PodcastTeacher to Parent
education in india 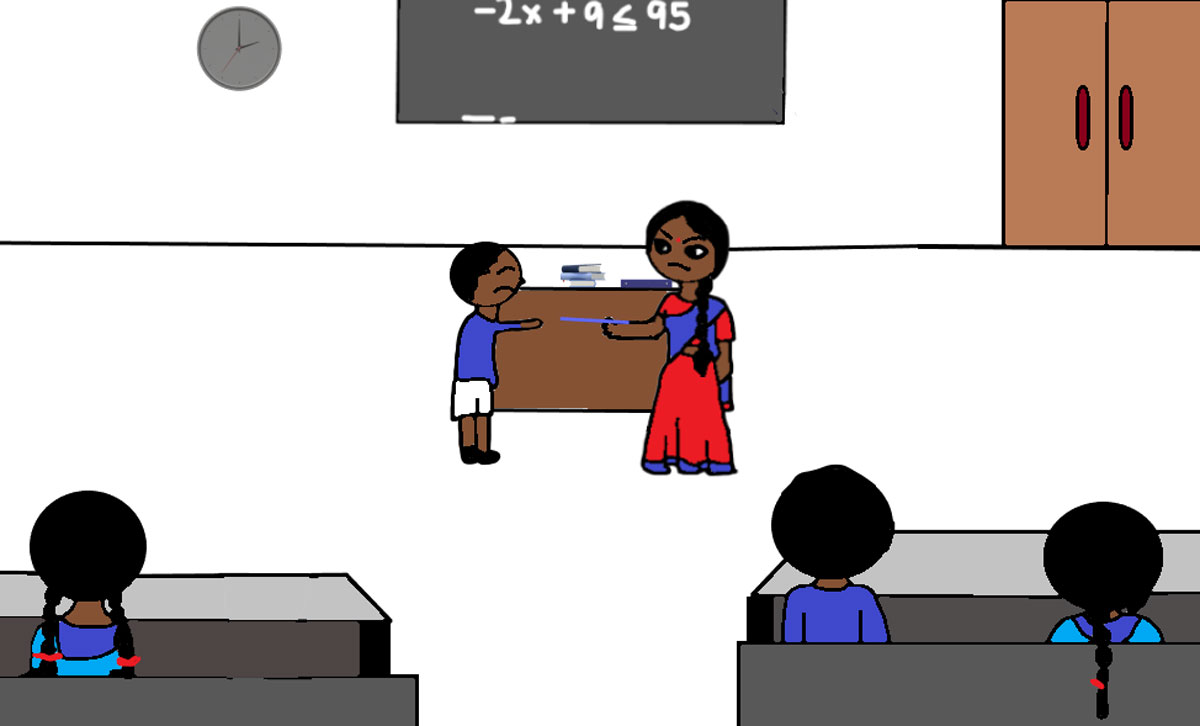 Last week, I talked about how obedience may not always be as valuable as we think. This week I want to ask you, what do you think of teachers hitting students in the name of discipline? Even though corporal punishment is banned by law, it is widely prevalent in Indian schools. Those teachers smart enough not to hit resort to mockery and humiliation of the students.

How do people justify this behaviour from adults? That’s because our expectations about students’ behavior and academic achievements are founded on the premise that obedience is a virtue. If you convince yourself that you are hitting someone for their benefit, it is easy to justify corporal punishment, isn’t it?

Not surprisingly, teachers hitting students is one of the most discussed topics among parents and teachers. “How can we teach kids when we are not allowed to hit them? We are supposed to let them do whatever they want and not correct them at all. These children will grow up to be spoiled brats.” Don’t you think that is a big jump—that a child will become a spoilt brat because teachers are not allowed to discipline them?

Yes, a small percentage of parents are permissive enough to say that their children can do whatever they want. But the rest do have boundaries for their children.

What lesson does hitting kids teach? Adults may think that the fear of punishment will stop kids from engaging in the same behaviour, but that’s not the case. All Children learn is that if they get caught, they will be punished!

What does the research say? Research says that corporal punishment does not teach children to behave better! A study by experts at The University of Texas at Austin and the University of Michigan looked into fifty years of research on the impact of spanking. They found that beating children made them more defiant in the long run. That’s the exact opposite of the justification for beating them. Not just that, the experts noted that children showed more aggressive behaviors and mental health problems too.

Here’s something else to think about: Since beating a child is an unfair use of power, there is no way to ensure the teacher is fair in selecting who they hit. Those of us with self-awareness monitor our biases and prejudices in the classroom. But many teachers justify their actions by quoting their prejudices. They overlook poor behaviour in some children and not in others. So usually, it is the same children who get hit repeatedly.

Children will make mistakes and challenge our authority. Adults must accept that their behaviour is part and parcel of growing up and learning to be responsible individuals. The trouble is with our expectation that children must respect and obey their elders no matter what. Shouldn’t we put the onus on adults instead? Adults must exercise better self-control; adults must have the skills to handle challenging behaviours.

Where does it begin? It begins with you, dear parents! Aha! Are you wondering how I managed to put it on you?

Here’s the thing. In almost all the discussions I’ve participated in on this topic, there is always someone saying, “Why did the teacher hit the kid? What did the kid do?” or “They hit us when we went to school. Don’t you think we turned out better than today’s kids?” People who ask these questions are also parents. As long as parents try to find an excuse for the adult’s loss of control, teachers have no incentive to change. True, we must teach children to accept our boundaries, but that is not by beating them into submission.

Learning is about taking risks, and kids can take risks only when they feel safe. Schools must be safe places for all students. Yes, there will always be kids whose behaviour puts others in danger. For these children, we should work to get a system in place. Our belief system should say that even there, even these challenging kids must be treated with respect and dignity.

This belief system begins at home. Adults must earn children’s respect. On the other hand, children deserve to be treated with respect and dignity unconditionally. Only then can we raise children who believe that they are worthy of respect.

A good friend’s daughter came back from school one day and decided that she really didn’t want to learn from adults who didn’t have the self-control or the maturity to treat her classmates with respect. Now, this child breezed through school, topping her classes. She had it easy in school because the teachers liked having someone as focused and bright in their classes. But the girl was mature enough to understand that her teacher lacked the skills to manage her class and instead took it out on kids who struggled to meet their expectations in class.

Another friend’s daughter spoke up when the teacher hit a student in class. The teacher managed to humiliate my friend’s child. When my friend took it up with the administration, she was shocked at their response. They asked her why her child bothered to interfere, as she wasn’t the one in trouble.

My daughters were hit in their early schools-for sitting oddly, not having a pencil, not doing their homework, having a strand of hair out of place, talking back, not passing the test…the list is endless. When they told us their stories, it was always with a ‘she did something wrong and so the adults had no other recourse but to hit them’ theme. I acknowledged that kids acting up in class could be challenging but consistently reiterated that learning to handle challenging behaviours is part of the job. When they first heard me say that adults should have better self-control, they looked puzzled. The teachers’ treatment had made them jumpy, nervous, and anxious about academics. When I sat with them to study, a sudden movement would have their startle and look expectantly for the blow to fall.

So we’d talk all the time about the consequences of poor decisions. Some types of mistakes they make will have to wait and see how it affects them. Other mistakes where they hurt someone or deliberately destroy something meant they’d have to make restitution. Certain other behaviours meant they’d be grounded. But under no circumstances would we hit them. Do you know what they said? “We don’t believe you.” When we use force to enforce discipline, we lose children’s trust!

Several years later, I overheard a conversation between two of them. One said, “But didi, what if the person who hits decides to be nice?” Her sister replied, “If someone doesn’t treat me with respect and then does something nice later, I still don’t think they are nice. I will not accept anyone hitting me for any reason. I deserve better!” I can’t tell you how pleased I was! It doesn’t mean that she will remember this all the time, but she’s beginning to think she deserves better.

When you correct your children or pull them up for pushing your limits, watch what you say and how you say it. Let your children believe that they deserve to be treated with respect even when making mistakes. Laws cannot eliminate corporal punishment unless our mindset changes. Societal change begins at home.