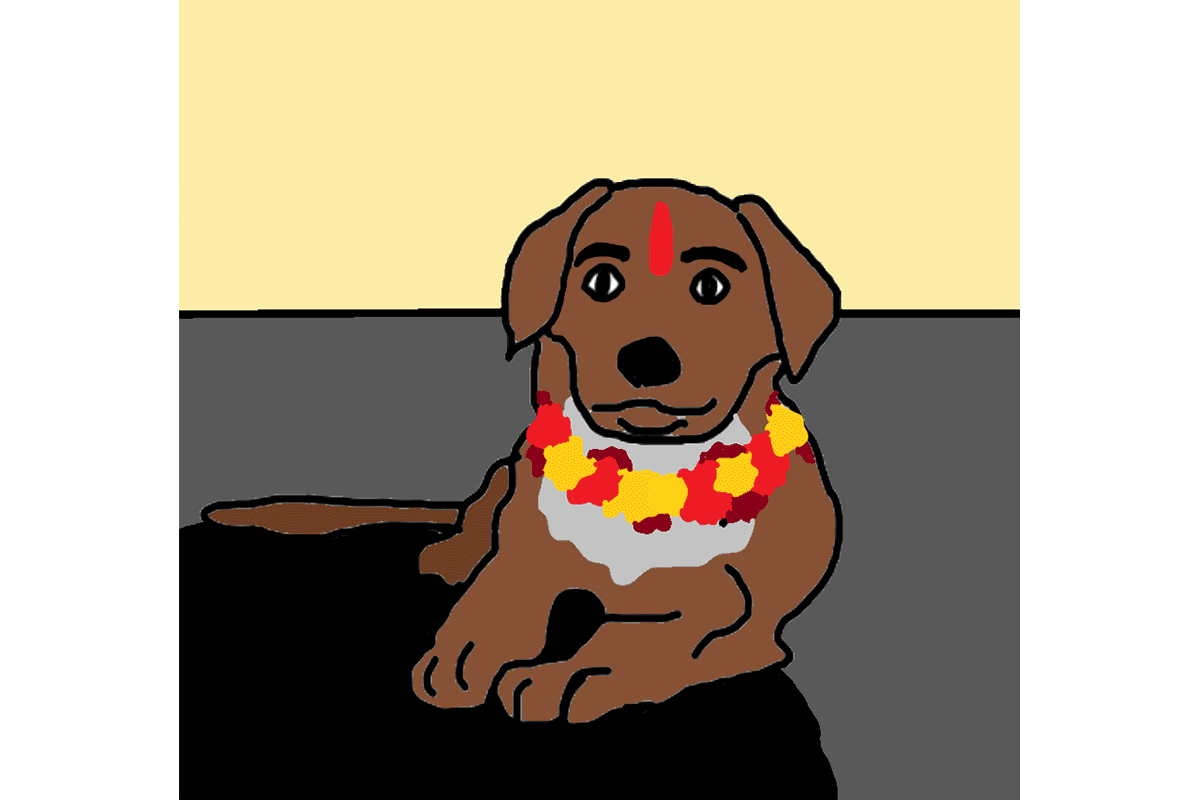 Our town was decorated magnificently for Tihar. Small stalls, their baskets overflowing with marigolds and diyas, dotted the streets of Kalimpong. New toys, big and small, stood in the glass cases, inviting us kids into the shops. People rushing to finish their shopping stopped suddenly to look at the colourful clothes swaying in the breeze.

It felt like my little brother, and I had been waiting forever for Tihar. My mother was so happy that I offered to go to the market with her to help carry the bags of vegetables and other goodies. She didn’t realise that I walked with my head sideways, my eyes tracking all the toys in shop after shop. When I got home and told my brother about all the toys I’d seen, he decided he had to be helpful too.

But of course, the trouble with younger brothers is that they can’t stop themselves from saying things aloud.

My mother looked at us, her brows touching her hair.

“Oh, NOW I understand why you two have been so helpful. No, no toys now.” Of course, being a little kid, my brother didn’t stop his negotiations. I could have told him that nothing would change her mind, not when she spoke in that tone.

I had grand dreams of what I was going to buy. Should I buy the board game, or will grandfather give me enough money to buy that big remote-control car? Just thinking about it all made me happy.

There was one other thing about Tihar that excited me. I had always wanted a pet dog, but we didn’t have one. Never mind, I had something better. One day, a street dog with thin, tall legs wandered into our building compound. The dog found its way to the shade under a Gulmohar tree and rested there. My friend Rohit and I were drinking water when we noticed him.

“Let’s get some water and food for the dog,” both of us spoke simultaneously. Soon a plastic bowl filled with water found itself under the same tree. The dog lapped it all up! The poor animal must have been thirsty! I ran home and found some chicken and rice.

After that day, Rohit and I made sure that the bowl always had water. My dad knew that I was carrying away some leftover food, and I took his silence as a ‘yes.’

He was the skinniest dog you could have ever seen, so why we named him Laddoo is beyond me! There was nothing round about him, but he was a very gentle and sweet animal. Sure, he was a street dog, but he had his own ideas of what, where, and when he would go places. Laddoo walked into our compound in the evenings after we got back from school. When we played cricket, and someone hit a sixer, Laddoo chased the ball down for us. If we climbed trees, he sat nearby, waiting for us. He became one of the cricket team members.

This year, Kukur Tihar was going to be special, for I planned to put Tikka on Laddoo and pray to him.

And just like that, the wait was over. Kaag Tihar came! My family put the food out for the crows and waited. Of course, my brother tried to count how many crows came. I tried to tell him that the crows looked alike and that he probably had the wrong number. Papa told me to leave him be. Younger brothers get away with stuff, I tell you.

My mother had given me a mala of Marigolds for Laddoo. So on the second day, that is, Kukur Tihar, I ran to Laddoo’s spot under the tree. Rohit and the others were already there. Laddoo sat in the middle, a bright tikka on his forehead. But that didn’t stop us at all. One by one, all of us put the tikka on him. I think Laddoo knew that it was his special day. He gobbled up the special food we gave him. And yes, we finished the day with a special game of cricket, throwing the ball far and wide so Laddoo could bring it back to us.

The next day was Ghai Tihar, and the evening would be Lakshmi puja. It was time to go to my grandfather’s house! My brother and I skipped and kicked stones as we walked ahead of my mother. Normally my brother would have complained about the walk up the hill. Not today!

“How much money do you think Baje will give us?” my brother asked.

“I am sure he will give us five rupees. I think I’m going to buy that remote control car,” I flipped a stone high in the air and caught it.

“Can I play with it too, daju? What do you think I can buy for five rupees? Shall I buy the cricket bat and a chocolate bar?” My brother looked at me eagerly.

“I’ll let you play with my car if you share your chocolate bar!” We were so busy planning and bartering that we didn’t notice that we’d reached grandfather’s house.

We hugged our grandfather and walked into the house. And waited. He and Ma were talking. Sometime later, I saw him bless ma and give her some money. I stared at it out of the corner of my eye. “Oh, he’s given her at least a thousand rupees! Now it’s our turn.” I whispered to my brother.

Grandfather took something out of his pocket and held it out to us. I bowed my head for his aashirvaad, his blessing, and my hand closed over the money. My head jerked up in shock at the fifty paise! I didn’t know what to say!

But my brother made up for my silence. “Waaaaaaaaa! You gave Ama a thousand rupees. You were supposed to give us five rupees. But we got only fifty paise. What can I buy with this? I want five rupeeeeees,” his wails filled the room.

I put the 50 paise on the table and walked out. What about my remote control car? I’d told Rohit that I was buying it with my Tihar money. How was I going to face him now? Why, oh, why did grandfather do this to me? I was so upset that I didn’t pay attention to where my feet dragged me.

I walked and walked, stepping off the road onto small prickly bushes. The path stopped at a stream, a rotting log lying across it, like a bridge over the water. I sat on the log and slid to the other side. Splashing noises made me turn around. Laddoo was wading through the water to join me! Where had he come from? Had he been walking behind me all this time? Or had he seen me just now? I didn’t care. It was as if a cloud had lifted off me.

I flung sticks as far as I could, and Laddoo ran to catch them. Out of the blue, he stepped in front of me out of the blue, and I almost tripped over him. “What is the matter, Laddoo?”

He let out a low growl. I put my hand on his neck. When had we entered the jungle? Do you know how you feel when someone hides and stares at you? I had the same feeling. I knew someone was watching us. My back stiffened, and my knees bent; I was ready to run. But which way should I go? The sound of rustling leaves and breaking twigs came closer. Laddoo moved to my right and growled louder. And then I saw it!

Was it five times my size or ten? What was that on its horns? I have no idea why I had these silly thoughts running through my mind. Everything happened at the same time. The Gaur took one step forward, and Laddoo jumped between us and reared up on his hind legs. I ran back a few steps and looked. The Gaur seemed unsure of what to do. Then he brought his head down.

Laddoooooo,” I screamed and ran to him. But the dog pushed me away, ducked, and snapped at the Gaur’s legs. I ran until I found myself at the log across the stream. The growls and the grunts were louder. I hopped on the tree trunk, panting. I yelled, “Laddoo, come back. Laddoo…” tears streamed down my face when I heard the sound of running feet. The dog was weaving his way through the small gaps between the trees that the Gaur couldn’t reach. Laddoo leapt into the water with a loud splash, and I slid my way to the other side of the stream.

Would the Gaur cross the stream too? I looked. Clear water flowed down the stream. I fell on my knees and hugged and kissed Ladoo. My Hero! He had stood up to an animal more than ten times his size to save me! He smiled; I’m sure of it!

We got back to the town, stopping to ask the way at the roadside tea stalls. A big crowd was gathered outside when I got to my grandfather’s house. Why was my mother crying? “Daju! Daju!” a voice squeaked. My brother ran towards me. The grown-ups trailed behind him, my mother leading the way.

First, it was all hugs, and then it was all scolding. But I felt ashamed when I saw my mother’s tears. I hadn’t meant for all this to happen; she must have been terrified.

“I would have given you more than five rupees. I gave it to your little brother. Don’t you ever run away again,” grandfather ran his fingers through my hair.

“I did not run away. I was just walking around and lost my way,” I told him.

Then they heard how Laddoo had saved me from the Gaur! Grandfather and the neighbours brought out more food for him.

Later grandfather gave me five rupees. I turned it down. Whatever he gave me was enough. My brother was too young to understand.

This time, when we walked home, we had a fourth member of the family-Laddoo!