A Day in the Library 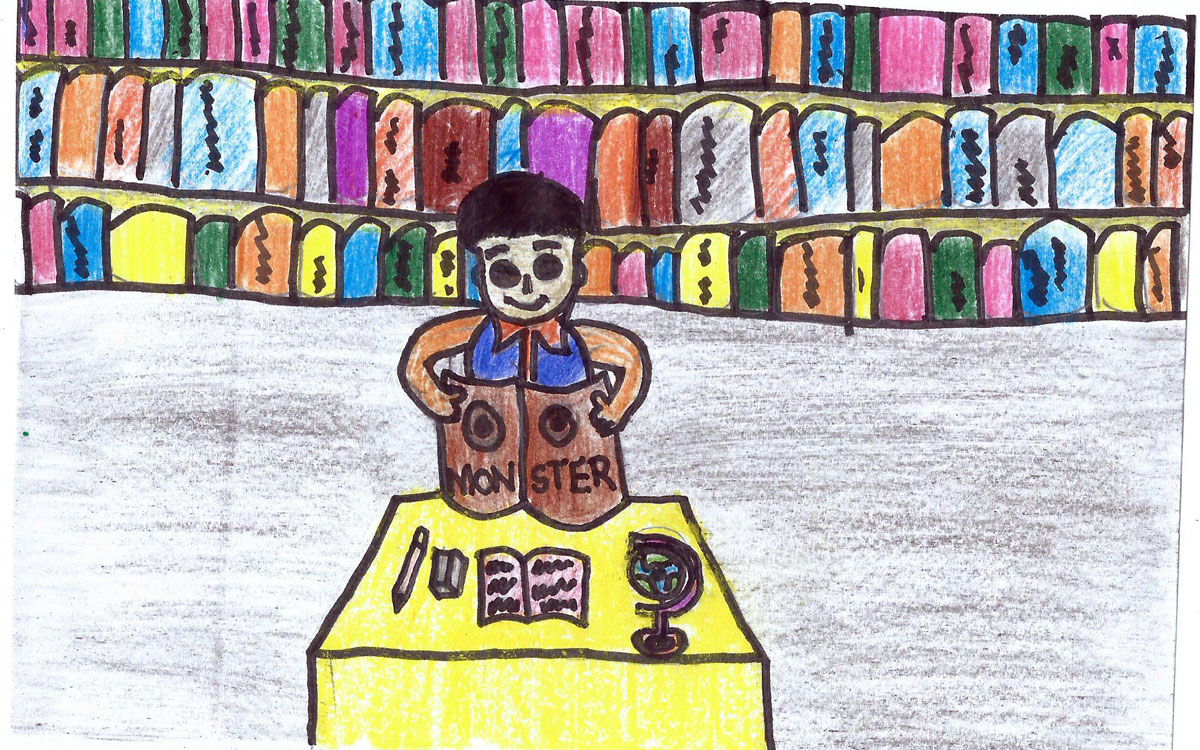 In the remote corner of a town, there lived a boy who spent most of his time digging his eyes in books. His parents wanted him to go out in the open, spend some time with his friends and make most of his childhood days. Instead, he preferred to go to the library.

One evening, as usual, Dan was at the library, researching about plants and animals, and how they adapt to different situations. The library was cosy, and Dan had a cheery fire burning right next to him. The only thing that was troubling him was that he could not find any information about his topic in the library. He had scraped almost 200 books and had been there in the library for a whopping seven hours.

He was going through his last book, which he thought was the longest and oldest book in the history of the longest and oldest books in the world, longing to find at least some information about his topic, when he noticed something very odd! He saw a new book emerging out of nowhere on its own, right next to the place where he was sitting. It was a dusty and a battered book and smelled like old socks that had not been washed for 10 years. The book was brown in colour and had a skull poking out of its cover. Dan got scared at first, but then he thought, “Hey! It’s just a book . . . what could be the harm?” Dan picked up the book and decided to read.

The title of the book read, ‘The Monstrous Book of Monstrous Monsters’. As soon as Dan flipped to the first page, the book came to life and started controlling everything in the library. The door creaked with no one in sight. The light flickered! Horrified, Dan looked up. He saw the librarian rising to the ceiling with arms and legs floating in the air. Along with him, others sitting in the library also rose. Dan heard their shrieking voices calling for help. In a fraction of a second, he saw the chair next to him breaking into pieces and getting scattered on the floor. There was darkness all around except for the light which was emanating from the hearth. With strange noises in the backdrop, Dan felt like he was in a haunted house and not in a warm library. Dan said to himself, “Enough of this nonsense . . . I need to stop this.” Fortunately, using all the knowledge gained from superhero books he had read before, Dan knew what to do.

First, he took the small blanket from the reception in the library, and tied it around his neck, without choking himself. He knew that every superhero, which he believed he was one, must have a superhero costume i.e., a cape. Dan stopped for a few seconds. “What if my plan doesn’t work?” he thought to himself. “There must be another way out!” The dismantled chair beside him gave him an idea. He took one broken leg of the chair and smashed it on the glass of the door.

“Help!” he cried, at the top of his voice. He wanted people outside to know what was happening in the library and come to help him handle the situation better. Then, he searched for the small key to the door and found it under one of the shelves. He took it and unlocked the door to get out. He grabbed the Monstrous Book with all his might, because by now it had become extremely heavy and bulky, and rushed outside of the library with it. He then dropped it on the ground and stomped on it, to stop it from controlling the library. As he did this, he noticed everything in the library getting back to normal, even the people floating in the air earlier had gone back to their places. He took a sigh of relief! Dan saw himself surrounding by lot of people in response to his earlier call. He told the whole story to the crowd including the policeman. After a while, he ran back to his house as it was already past his sleeping time.

The next morning, when the same old newspaper with the inky smell was delivered, Dan picked it up immediately and looked at the headline in big letters: ‘Boy Named Dan Saved Library from Turning into a Haunted House’. He was very proud of himself, just one little thing was bothering him; he could not complete his research.