The Festive Season: Tihar, The Nepali Festival of Lights 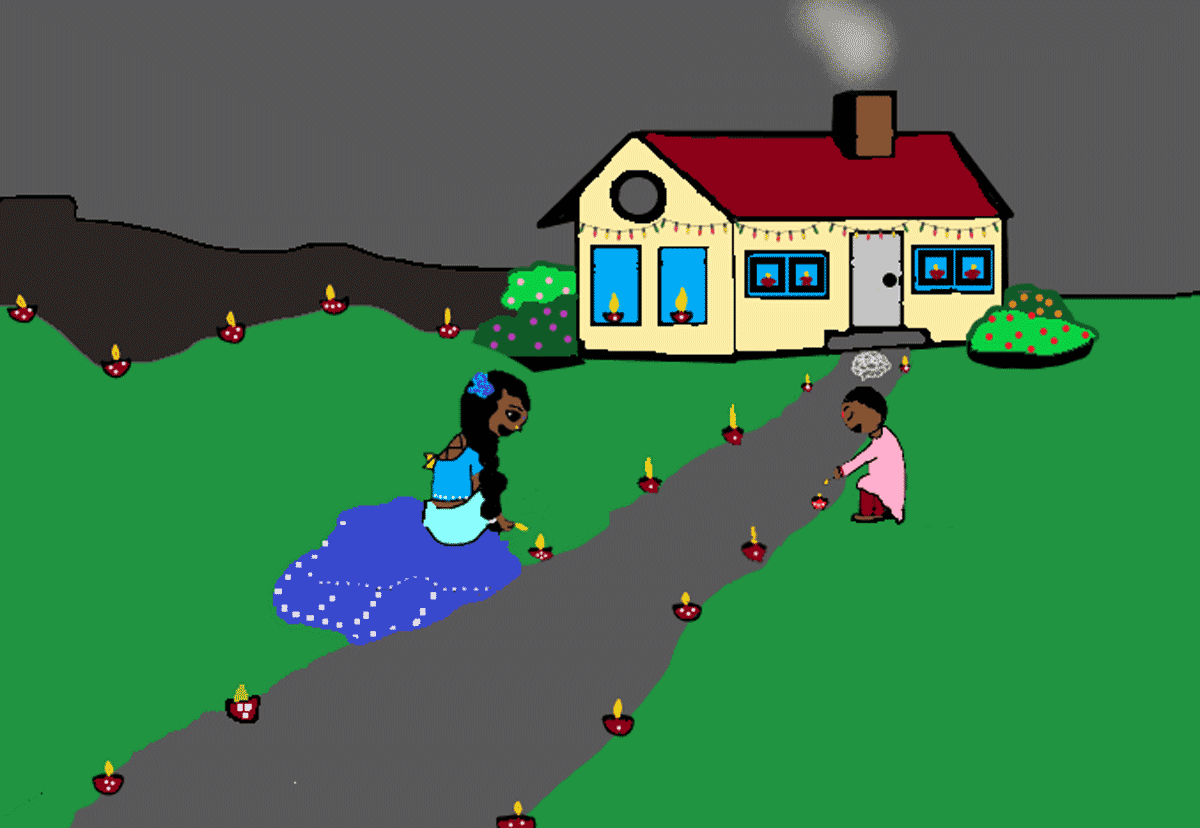 Did you know that around Diwali, the Nepali community in India (and in Nepal, of course) celebrates the holiday known as Tihar? There are common elements between Diwali and Tihar, but there are differences too. Sometime this summer, our friend Mr. Sanjay, shared his childhood memories of Tihar. Mr. Sanjay is from Kalimpong in West Bengal, which has a sizeable Nepali community. He tells us that Tihar is celebrated to honor the God of death,  Yama Dharma Raja. I have a feeling that most of you kids will like this festival. Guess why? The animals associated with Yama Dharma Raja– the crow, the dog, the cow, and the ox are also worshipped during this festival. Tihar is a five-day festival, and each animal has its own special day. This year, Tihar starts on October 22nd and ends on October 27th.

The first day is Kaag Tihar, the day of crows. Hindus believe that crows have a connection with their ancestors. When the birds are worshipped and fed, their ancestors’ spirits are fulfilled, all thanks to a boon from Yama Dharma Raja. Nepali Hindus feed crows on this day because they believe it will bring them good tidings. The more crows that come to eat your food, the better for their

The second day of Tihar is Kukur Tihar. This is the day to worship dogs, be they pets or strays. My children liked that it is an inclusive festival for strays and pet dogs. The legend behind this celebration comes from the Mahabharata. When the Pandavas leave earth, they walk along Mount Kailash to reach the gates of Swarg Loka, or heaven. A little dog joins them on their journey. One by one, Draupadi and four brothers fall back, unable to complete the trip. Yudhisthira, the oldest Pandava, is left to walk alone. The dog keeps pace with Yudhishtra until he reaches the gates of Swarg. Alas! Indra, the lord of heaven, refuses to let the dog enter heaven. He tells Yudhishtra that he is allowed to enter heaven in his body, but not the dog. But Yudhishtra refuses to abandon the faithful dog. He decides to turn back. And Lo! The dog disappears, and in its place stands Yama Dharma Raja. It was a test for Yudhishtra to see if he indeed was as righteous as he was reputed to be.

On this day, Nepali Hindus put a tikka made with a mix of kum kum or Abir, rice, and yogurt on all the dogs and garlands, especially marigold garlands. Can there be a celebration without food? Mind you, the special food on this day is for the dogs.

The third day of Tihar is Ghai Tihar, the day when cows are worshipped. The gentle cow symbolizes wealth and prosperity. On this day, people offer prayer to the cows and put tikka and marigold garlands on them. Wealth and prosperity indicate that it is the day for the goddess Lakshmi. The cow is the Vahan or mount of Goddess Lakshmi. The festivities of Lakshmi puja share similarities to those of Diwali in the rest of India. On the evening of Ghai Tihar, the community worships goddess Lakshmi and lights diyas or oil lamps to welcome the goddess to their homes. Now you see why Tihar is also called the festival of lights! Homes are cleaned thoroughly, and people draw footsteps from the house’s entrance to the puja room to signify Lakshmi’s arrival. This time of the year is marigold season. Baskets of marigold flowers throng the market, and families decorate their homes with strands of these bright orange flowers. There are elaborate Rangolis made with Kum kum or Abir, marigold flowers, and rice flour. Diyas are placed in the rangolis as well. Women and children go from home to home, singing songs. This tradition is called Bhailo. The songs themselves are called Bhailini. In return, they receive money or small gifts from the people in the homes.

The fourth day of Tihar has different celebrations for different communities. For some, it is the Goru Tihar or the day of the ox. In traditional agricultural societies, the ox was a very important animal. Farmers plowed their fields using the ox. It is also the Vahan or mount of Yama. It is no wonder that there is a special day for this animal! The other puja on this day is the Govardhan puja, especially for Nepali Vaishnavs, or worshippers of Vishnu. Cowdung is piled into a small mound to symbolize the Govardhan Mountain from Krishna’s childhood, and special prayers are offered to this mound. The third puja on this day is the Mha Puja. Mha puja is celebrated by the Newari community. On this day, families get together and perform puja to their body and their mind. What does that mean to worship our body and mind? To live a happy and fulfilling life, we must take care of our bodies and minds, don’t we? That means we must recognize that our life is important, no matter what difficulties come our way. Now, isn’t that a good thing to Set aside a day to pray for our body and mind? Families have a festive feast with special foods for this day. In the evening, young men and children go from home to home, singing songs. This tradition is called Deusi. As times change, the manner of celebrations also changes. These days, women and men combine to do the Bhailo and Deusi.

The last day is the Bhai Tika, much like Bhai Dooj. As the name implies, sisters put a tika on their Bhais or brothers and offer special prayers for their brothers’ wellbeing. The tikka consists of five colours, that is, Yellow, green, red, blue, and white, and is known as panch rang tikka. There are two legends behind this celebration, both involving Yama Dharma Raja. In one, the river Yamuna is Yama’s sister. She hasn’t seen her brother for a while. So when Yama comes to visit her, Yamuna does an elaborate puja and makes a garland of the bright purple flowers, the makhamali flowers. These flowers don’t fade or wilt for a long time. Yamuna asks her brother to stay until the flowers fade and wither away.

In another legend, there is another young woman, also named Yamuna. She was performing a puja for her brother when Yama Dharma Raja came to their house. He had come to collect the brother’s soul as his time on earth had ended. The sister pleaded with Yama to wait until she finished her prayers. Naturally, Yama agreed to her request. Yamuna then proceeded to draw out her prayers, with a feast and several special offerings, one of which was the garland of the Makhamali flowers. She requested the lord of death to wait until the flowers fade. Yama realized that Yamuna had outwitted him. But he was pleased with her affection for her brother. So what did he do? He blessed the young man with a long life. Either way, the day signifies when sisters offer special prayers for their brothers. What if you don’t have a brother or a sister? Nowadays, brothers and sisters do the puja for either sibling, and if you don’t have a sibling, cousins and friends can perform the prayers for you.

What do you think, my friends? Isn’t it wonderful to honour and respect the animals that are so much a part of our lives?

This is the end of today’s episode on Tihar.

Come back for more, as our next episode is a story on Kukur Tihar, based on the childhood experiences of Mr. Sanjay.