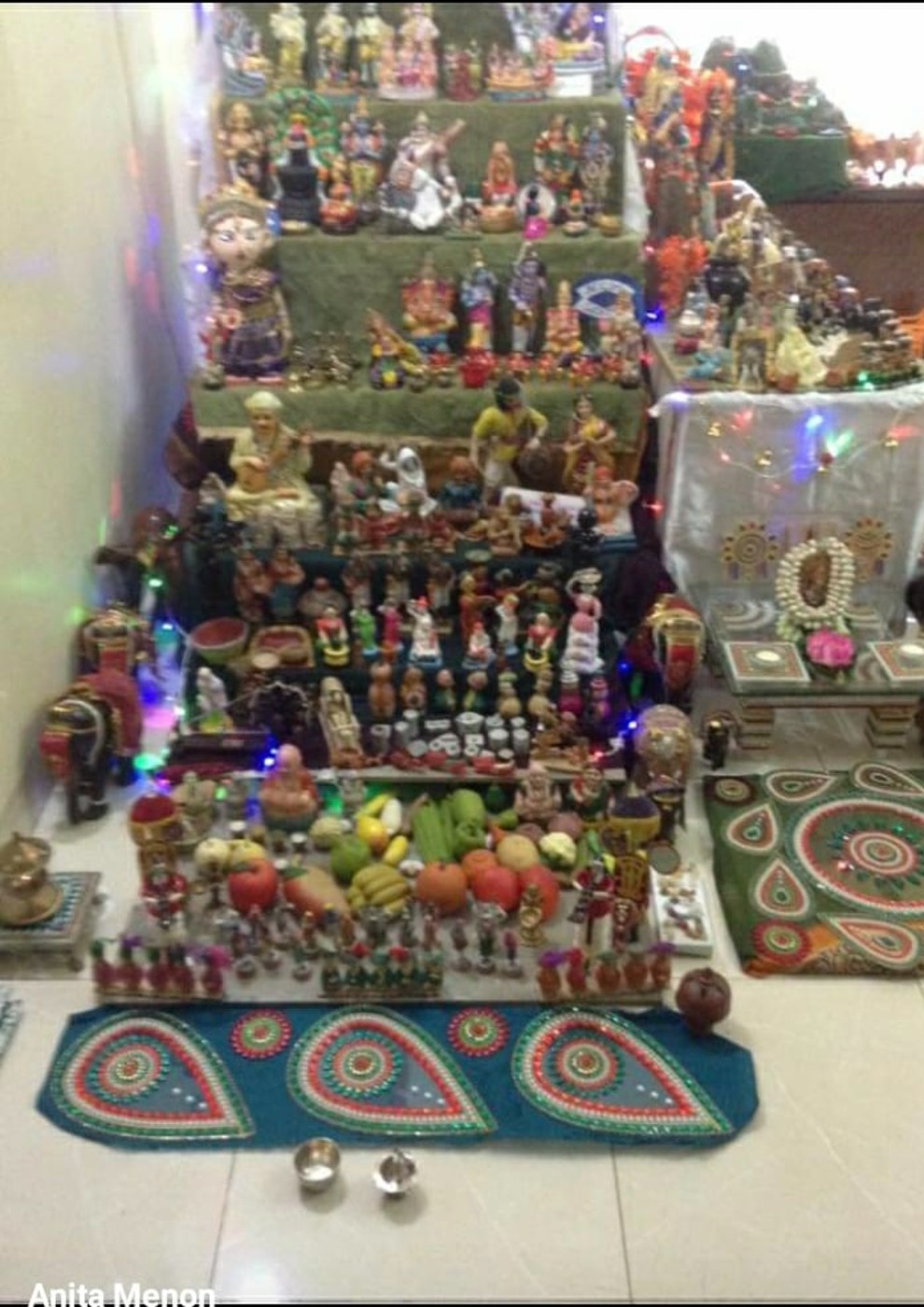 Golu is the Thamizh word for the display. In this tradition, dolls are displayed on steps. In Tamil Nadu, it is known as Bommai Golu. In Andhra and Telangana, it is called Bommala Kolu, and in Karnataka as Gombe Habba. Navratri is the festival to celebrate Devi, but it is also the festival of dolls that brings people together

Where are these dolls arranged? Nowadays, you can buy a display with wooden or metal steps. But earlier, families would get together and make the steps. Cardboard boxes, old tin biscuits, wooden planks, and anything that was sturdy and would fit into the structure were roped in. The display, or golu padi as it is called, always has the odd number of steps 3, 5, 7, 9, or 11 for the very ambitious!

Once the golu padi is ready, you must cover it up to make it look neat and contrast with the dolls. A white veshti or dhoti was the favoured cover when we were children. Now you can buy fabrics of different colours, of course.

What are the types of dolls used for the golu?

Traditionally, the dolls used for the golu are made from local resources like clay, wood, or coconut shells. The traditional dolls for the golu are the Marapachi Bommai, Kalimann Bommai, Thanjavur Bommai, Kondapalli Bommalu, Channapatna toys and Soppu Saman.

The Marapachi Bommai: Maram means tree in Tamil, and bommai means doll. These dolls are human figures carved out of red sandalwood, teak, or rosewood. A pair of male and female marapachi bommai are given to the bride and groom at weddings. Since these dolls are human figures, you get to dress them up in sarees and veshtis or dhotis. Quite often, people adorn these dolls with jelwellery too. In Karnataka, they are known as pattada gombe. The marapachi dolls have a special place in the Navratri golu. They are usually placed at the topmost tier of the golu padi. The marapachi dolls are made in a town called Settigunta near Tirupathi and signify Lord Vishnu and Bhu Devi.

Kalimann bommai: Kalimann means clay. While these clay dolls are made in several towns in rural Tamil Nadu, a few places are better recognized for their craft. Vilachery, a potters’ village near Madurai, Vandipalayam near Cuddalore, Kancheepuram, Panrutti, and Kumbakonam are famous for their clay dolls. In fact, a street in Kancheepuram is named Bommai Kaara veedhi, or doll makers street, because all the families on the street make these clay dolls. The doll-making skills are passed on from generation to generation in these families. To make these dolls, the artisans knead the clay well and make it supple. Then they stuff and press the clay into moulds. Next, they separate the wet doll from the moulds, smoothen the surface, sharpen the features, and leave it to dry in the sun. Once it is baked in a kiln, they paint the dolls with vibrant colours. Earlier, the artisans used natural colours, but now they use readily available paints because these are brighter. Most important in the golu are the forms of the Devi. These include the Ashtalakshmi or eight forms of Lakshmi, Durga as Mahishasuramardini, and Goddess Saraswathi. Lakshmi signifies wealth, Durga stands for strength and courage, and Saraswathi embodies knowledge. Then there are sets of dolls, like the Dashavatharam or the ten avatars of Vishnu, scenes from the Ramayana and Mahabharata, Murugan and Ganesha arguing over the mango. After the dolls depicting the gods come the famed devotees like Avvaiyyar, the Azhwars, and Garuda.

Then you have the dolls of famous people—Freedom fighters like Mahatma Gandhi, Literary figures like Thiruvalluvar, the author of Thirukural and the poet Bharathiyaar, and the three leading figures of Carnatic music-Thyagaraja, Shyama Shastri and Muthuswami Dhikshitar.

But it is not all Gods, Goddesses, and important people.

A whole bunch of dolls is dedicated to everyday people, like the farmer, the merchant, the wedding party, village scenes, temple scenes, and even cricket teams!

The other set of dolls from Tamil Nadu is known as Thanjavur Bommai. Thanjavur is a famous temple city in Tamil Nadu. Several rivers flow through the city, the chief of which is the river Cauvery. The clay from the riverbanks is used to make these dolls. There are two kinds of Thanjavur dolls:

These dolls are made from clay, tapioca flower, and sometimes from Papier Mache.

Soppu Saman: These are miniature kitchen sets-pots and pans, spoons, plates and cups, and more made from wood, steel, and sandstone. The wooden soppu is painted in bright colours, and many a child in South India has grown up pretending to make dosa or filter coffee for their family. The steel miniature sets are known as Bhatukali and are made in Maharashtra. The colourful wooden miniature kitchen sets are made in Ambasamudram in Tamil Nadu.

Chanapatna is India’s own toytown or Gombegala Nagara! It is in the state of Karnataka and lies between Bangalore and Mysore. The Channapatna toys are made of a soft wood known as Ivory wood, though lately, other types of wood are also used. These toys painted with vegetable dyes are safe even for very young children. You can find all kinds of themes-animals, vehicles, musical instruments, people, and more depicted in these toys. Channapatna toys have been around since the times of Tippu Sultan.

Kondapalli Bomma: Kondapalli is a small town near Vijayawada in Andhra Pradesh, where they make wooden dolls. Like the other doll-making crafts, this tradition has been around for several hundred years. Kondapalli toys are made from Tella Puniki or the White Sander tree that grows in the Kondapalli hills. These dolls depict Hindu Gods and Goddesses, animals, birds, and characters from everyday life. Earlier, these were mostly dolls to show rural life, but nowadays, some dolls also highlight urban scenes. Kondapalli dolls, like the other traditional crafts, are painted in vibrant colours with attention to minute details.

Typically in a golu, these dolls are used together. For example, it is common to see the Chettiar or the merchant selling grains and pulses kept in the soppu sets. Wooden animals from the Kondapalli or the Channapatna toys are grouped with the clay animals.

As with other traditions, the composition of the golu has changed over time. Toy makers from other states like Rajasthan and West Bengal travel to Chennai to sell their toys around Navratri.

Did you know that many of these crafts are handed down from generation to generation?? For all that there is a demand for these dolls around Navratri, the craftspeople do not always earn enough. As a result, youngsters in these families opt to pursue other careers. My friends, it should never be a choice between art or livelihood, isn’t it? The craftspeople will teach their traditions to their children only if they can earn a good living out of it. We, the public, are responsible for enabling our artisans to create their dolls and pass on their skills to others. What can we do to ensure that these crafts thrive? It is not enough to buy these as objects of display for one festival season alone. Can these be the return gifts for our birthday parties and anniversaries? What other ideas can you come up with to support our toymakers? Do write to us and let us know what you think can help our artisans at podcast@forallourkids.com.