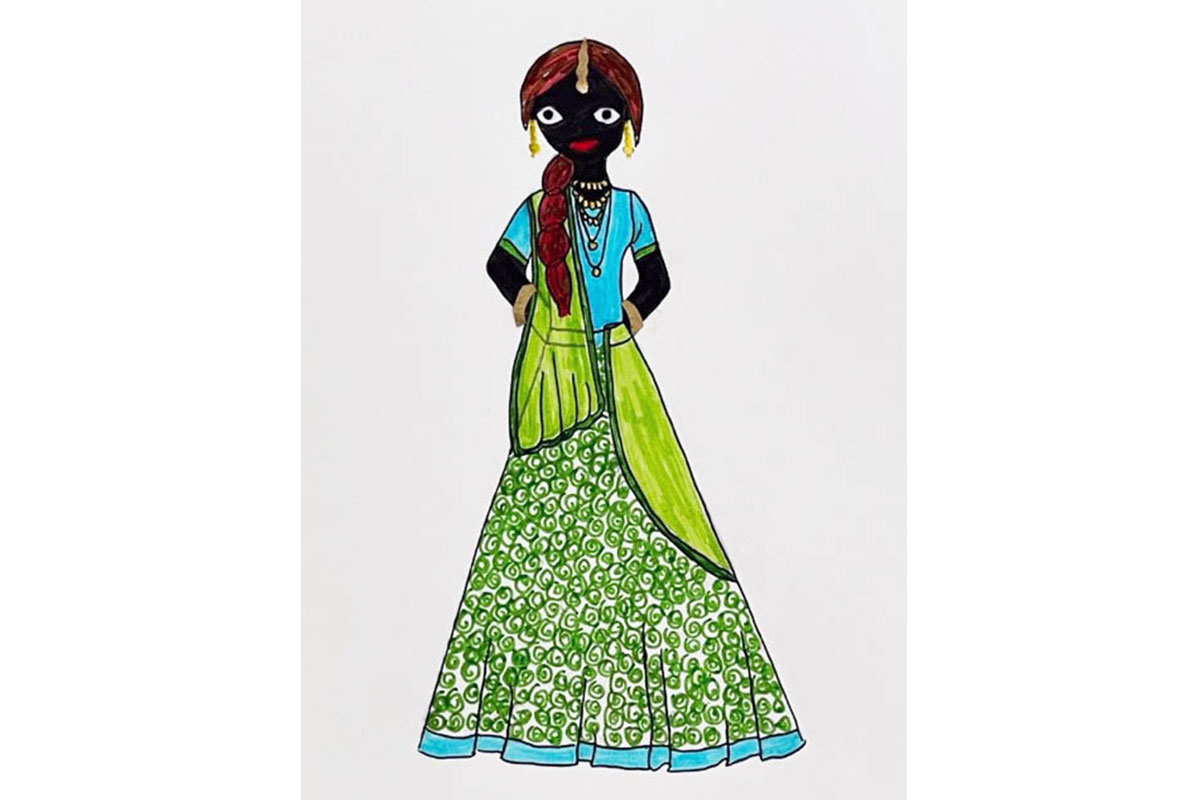 The queen paced to and fro in her room all day long. That night she tossed and turned until the wee hours. It was no good! She had to do something!!! The covers went flying as she got out of bed. Her aimless wandering brought her to the royal library, and she gazed into the distance, not knowing what to do. Then her eyes cleared and her heart skipped a beat. Someone had replaced a book of poisons among the royal recipe books!

The next few days were busy days for the stepmother. She had never learned to do any work in her life, but here she was, with raw mangoes, herbs and flowers from her garden, salt, chilli powder, oils, mustard seeds, hing, and more spices. She tried one thing after another and fed the birds outside her window. Finally, satisfied with her efforts, the queen returned to her room, removed all her jewellery, and washed off her kajal and bindi. She draped an old sari that she had borrowed from a maid long ago. Nobody stopped her on her way out because she looked so ordinary and unimportant. No one was curious to find out what this woman had tied in her saree pallu.

The queen walked purposefully into the jungle, hacking away at the branches and vines that stuck out. But when she saw the dwarfs’ house, her steps slowed, shoulders hunched, and her face looked drawn.

Snow White was in the kitchen making crispy paper roast dosas. She had made fresh dosa podi or gun powder for the dwarfs to try. It was past noon, and she was going to eat her lunch late. As the batter sizzled on the pan, the princess looked up. What was that old woman doing limping on the path outside? She saw the woman rest on a rock outside her home. Snow White opened the door to dine outside.

“Mmmm, oooh, silly me! I’m eating my lunch late today. You look hungry too. Would you like some dosa?” Snow white avoided answering the woman. The queen hesitated. Hiking through the jungle had made her hungry, thirsty, and tired. What harm could a bite of dosa do? Besides, it was perfect for sharing her gift with Snow White. She quickly untied the bag at the end of her pallu and took out a jar. “Here, I made some mango chutney for my daughter. We can have it with the dosa.”

Snow White ran back in and grabbed the gun powder. Soon the two were eating lunch together.

The stepmother loved the gun powder, and the stepdaughter enjoyed the mango chutney. But Snow White’s caution had slipped; for ten minutes later, her eyes drooped. She rubbed them a few times, but nothing, nothing would keep her awake! She fell into a deep sleep.

When it was evening, the seven dwarfs returned home. On the ground by the door lay Snow-White, her plate and tumbler unwashed. They suspected foul play by the stepmother, but no one was to be seen near their home.

The dwarfs brought Snow-White inside and lay her on a dhurrie. They brushed her hair gently and covered her. The youngest dwarf started weeping. The others just sat around gloomily. Snow White looked just like she had when she was alive, her dark skin glistening. Then one of the dwarfs spoke up. “Let us put her in a clear glass case and carry her around. Maybe someone will find a way to wake her up.”

“That sounds like a good idea, but where do we get a clear see-through case?” asked the youngest.

“Hey, I can only come up with the ideas; the rest of you have to help make those ideas come true,” the dwarf retorted.

Ooof, the dwarfs were tetchy!

“Let me make sure she is not breathing,” said the youngest. He brought a feather and held it under Snow White’s nose. Two things happened at once, two things that made the dwarfs jump out of their skin!

At the door, a thumping loud enough to wake the dead, and here, a thin achoo, and Snow-White sat up.

“Why are you holding that feather under my nose? And why isn’t someone opening the door?” Snow White was puzzled. “But, but…you, are you alive???” the dwarfs stuttered.

“Do you think I’m talking to you while I’m dead? Of course, I’m alive! Will, one of you, open the door, or should I get it?” Now Snow-White was cross!

A dwarf pulled the door open to see the queen, her face red, mouth hanging open, and water running down from her eyes, nose, and mouth.

“That dosa podi, what did you put in that powder? You were trying to kill me!” She gasped, holding her stomach.

THE QUEEN! SHE”S THE QUEEN!” The dwarf pulled the woman into the house, even though there were no nosey neighbours around them.

“Give her some milk,” said Snow White, rising from the bed.

The queen gulped one tumbler of milk, then another. Finally, she stopped panting and looked at the eight people glaring at her. “You tried to kill your queen…,” she began.

There was a knock at the door again. What now?

“Hello, I’m the prince from a faraway kingdom. My astrologer told me that I would save a young woman and marry her if I walked down to the caves in this jungle. I kept walking round and round, but I saw no one. Ooops, did I come at the wrong time?” he looked at Snow White, the queen, and the seven dwarves.

“No, No! You are right on time!” Snow White thought quickly, almost leaping at him. “Listen, I think your astrologer made a few mistakes, but he was right about the main idea. You’ve come to the right place. This poor woman needs help. She ate something from the jungle, and now she thinks she is the queen. Can you please take her to your kingdom and ask your doctors to cure her? I don’t think there is anyone in this jungle who can cure her.” She pleaded with the prince.

The handsome prince looked at the woman. “I am the queen; I am her stepmother. She is the princess Snow White…”

“See what I mean? She needs help. Please, don’t leave her to suffer in this jungle. Take her with you.” The dwarfs stood in a row beside Snow White and nodded.

“You think…this is what my astrologers meant?” the prince’s handsome face looked undecided.

“But of course, they wanted you to save her!” Eight voices rang as one.

So, the prince asked his soldiers to take the queen to his carriage. Snow White packed her more dosas without any gun powder this time.

A few days later,  Snow White returned to her palace. The king, her father, was surprised to see her. “My dear, I thought you were away studying. How did you get back so soon?”

Then she went inside and broke the queen’s mirror into pieces.