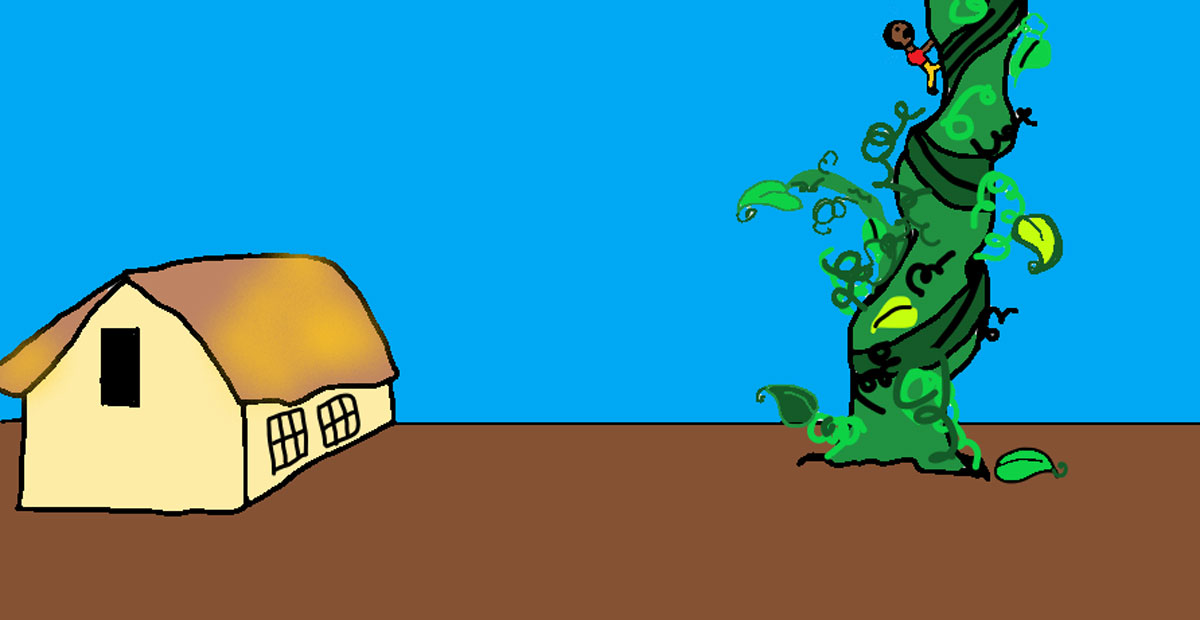 Months passed, and I grew restless. Now that we weren’t starving, Ma never worried about my school fees. The history test was coming up, but I couldn’t concentrate. I paced up and down the garden when I first noticed the tiny pods popping up on the beanstalks. I must get this nagging worry out of my system if I had to bring myself to study.

I ran to Ma and made a special request. At first, she was nervous, but I knew I could make her see it my way. Ma got busy in the kitchen. I ate a good lunch, but Ma still packed me a bag of things to eat and some water too. Then I began the long trudge up the beanstalk.

At last, I came to the cloud. I retraced my footsteps from my first trip. And there, by the door, stood Beanpole, looking wistful.

“Hello!” I waved to him. “Here, Beanie, my Ma made it, especially for you!” I held out a packet wrapped in banana leaves. Beanpole looked stunned at this small act of kindness. I realized that his life must have been one of service to his ungrateful brother. The aroma from the packet hit him hard, and he sat down right there by the door and opened it. He must never have seen or smelled anything like this before. On top of white rice fluffier than the cloud around us lay the most delicious-smelling kidney beans. Ma’s cooking, I tell you!

“Go on, eat it. We call this Rajma chawal. This is one of the dishes I told you about last time I was here.”

Beanpole dug into the food and finished it in no time. After all, he was a giant, even if he looked like a runt. I had packed more than a man could eat, but it wasn’t much for him.

I had given something in return for his help that made me happy.

“I have to go back n…” the ground shook under my feet. Oh no! Beanpole whisked me into the house and shut me in the cupboard of cans in the blink of an eye.

In came the giant, as before.

Once again,  he sang

I smell the blood of an Englishman!

Be he alive, or be he dead,

I’ll have his bones to grind my bread!

He stood in the middle of the room and sniffed loudly. “There is a different smell today, isn’t there? Did you make something different today?” I thought he looked hopeful.

“Oh, go on! You’re confusing the smell of the baked beans for humans. Just eat your dinner, and you’ll get over it.” Beanpole said to the giant.

I saw the giant pudgy hands dip a big mound of bread into the baked beans. “He’s finished his dinner. Wonder what comes out today?” I thought.

“Bring my hen that lays golden eggs,” he ordered, and Beanpole obeyed. The giant said, “Lay!” and the bird laid a golden egg. Then he put his head on the table and began to snore.

I crawled out of the cupboard and made my way to the table. I stood on my toes to grab the hen, but I couldn’t reach it. I did get a golden egg, though, and that’s better than nothing, I consoled myself. Crawling to the door, I looked for Beanpole. I needn’t have worried. Beanpole slid the latch quietly, and out we went.

I felt I had to explain myself again. “Listen, Beanpole; I hope you don’t mind me taking the egg. It’s just that we play this amazing game called five stones. These eggs are the right size and so bright that we can play with these even at dusk.”

“Oh, wait here,” Beanpole disappeared inside the house. When he returned, he held the hen, one hand around its beak.

“I don’t want to get you into any trouble….” I began. “Consider this a thank you for the delicious kidney beans and rice! Don’t worry; I’ll give him some other treasure and keep him busy.”

And so, I came back home with the hen that laid golden eggs.

A few months passed, and all the beanstalks were heavy with pods. My mother hired some village lads to harvest the different beans. The baskets of beans gave me an idea, and I went to talk to my mother again.

The smell of the food was hard to resist. Beanpole sat on the road and opened the gift. “A feast! it is a feast!” shouted Beanpole, for there was rajma, chawli dry curry, mung beans kootu, matki beans, and channa masala. There were packets of rice and chapatis.

A voice boomed from behind. How had we not heard the giant? Drats! He had padded his feet with towels and snuck up behind us. One look at me, and he began,

I smell the blood of an Englishman!

Be he alive, or be he dead,

I’ll have his bones to grind my bread!

“Well, you can’t!” I stood up. “We have Punjabi, Gujarati, Marathi, Tamil, Telugu, Bengali, Odia, Bhil, Gond, Lambada, Irula, Manipuri, Assamese, and more but no Englishman. They left for their home a long time ago. Nor is the feast for you! You can have some IF Beanpole agrees to share some with you.”

“I told you, brother, our clouds moved away from England long ago. We have been hovering over India this past year.”

“What! Do you think the polar jet stream brought you this far from the UK?” I asked him.

The brothers looked at me. “What? Why are you looking at me as if I spoke in Hindi, or Tamil, or Oriya, or Maithili, or Urdu?” My teacher’s voice sounded in my head, “Atmosphere, air current, temperature difference, earth’s rotation.” I better switch him off. The giant’s face swelled in anger.

I saw those pudgy arms, the arms that squished the loaf of bread, reach out to squish me, but Beanie was quicker. He hurled one of the open food packets straight at his brother’s face. That’s all I needed—those few seconds gave me time to duck and run to the beanstalk. I felt the tremor of the beanstalk and looked over my shoulder. Oh, Thank goodness! It was Beanie…he was coming down the beanstalk too.

Swish, swish, swish, the leaves swung back and forth as we hopped from one stalk to another. “Oh, come on!” Beanie swung me over his shoulder, and I hung on to his neck for dear life. Yes, we got down much sooner because Beanpole did have loooong legs.

When we came closer to the garden, I shouted, “Mother, Mother, bring me the axe.” It is easy to have a giant do your work for you, even if he is a runt. Beanie cut down the beanstalk in no time.

“Ma! Where did you get all these types of food?” “Arre, you kept talking about beansta, so I got a smartphone. Then the people at Hotel LOL Bhavan showed me how to find recipes using the phone. Beanie, these are all different kinds of dal in India,” her face beamed with pride. My mother is using the internet! Lovely!

“Why didn’t your brother follow us, Beanie?” I turned to my friend.

“I saw him sit down to open the other food packages. You know the packet I flung at him went straight into his mouth. Once he tasted the food, he must have wanted more. Anyway, that gave us time to escape.”

“Here, beta, the phone. You can borrow it over the weekends, but you must concentrate on your studies during the weekdays,” Ma shook her finger at me.

“Don’t worry, Ma! I seem to be taking in what my teachers say even when I don’t want to. I will finish school!” I reassured her.

The next few months were weird. I knew that my Ma and Beanpole were up to something because they were always whispering. They took me to the newest restaurant in the neighboring town for dinner one fine day.

“The place looks so busy! Will we have to wait long, do you think?” I asked ma. Shaking her head, she said, “No, No! It’s your friend’s restaurant, after all.”

I have my insta account now…only it is full of pictures of beans palya, channa masala, green mung kootu, rajma, matki dal, cluster beans, lobia, sambhar, paruppu rasam. Do stop by when you come our way!