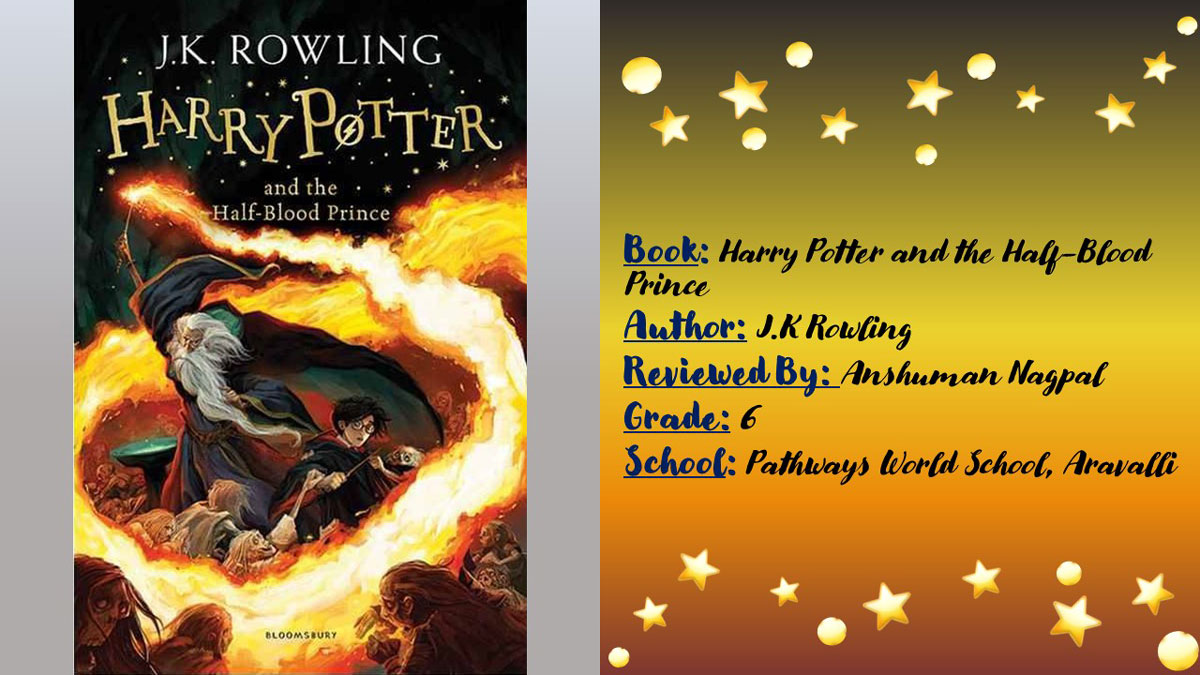 “We must try not to sink beneath our anguish, Harry, but battle on.”

Amazing and inspiring words by Dumbledore, from the book ‘Harry Potter and the Half Blood Prince’.

Written by JK Rowling, and published on 16th July 2005, this book was my favourite amongst all the Harry Potter books I have read so far.

The Half Blood Prince revolves around a boy named Harry Potter, the child who survived the killing curse, and his attempts to thwart Voldemort (You-Know-Who), along with the headmaster of his school, Albus Dumbledore.

In the book, as more and more wizards and witches get to know about the return of the powerful and evil wizard, Voldemort, they start to fear whether the world is safe anymore. Voldemort is on the rise, and so are his Death Eaters, which is why someone must be given the responsibility to stop them from conquering the world.

As Harry starts his 6th magical year at Hogwarts, he becomes the Captain of the Quidditch team, and he starts to get private lessons from Albus Dumbledore, cutting down his time with his 2 best friends, Ron Weasley and Hermione Granger. The lessons he has with Dumbledore enlightens Harry on Voldemort’s tough, as well as dramatic history, and reveals answers to a lot of the questions Harry had in previous books in the series.

With a lot going on his mind, including his suspicions about Draco Malfoy being a Death Eater, Harry is entrusted with a mission, which is key to knowing Voldemort’s biggest secrets. If one wants to know Harry’s mission, as well as his and Dumbledore’s adventures, one needs to lay one’s hands on the book!

Personally, this book was the best one in the entire series of Harry Potter unless someone has read the last one. It introduces the readers to ‘Horcruxes’, an object I was inquisitive about since the time it got mention in the book for the first time. The story portrayed is an excellent mix of fantasy, action, and adventure with a little blend of romance and sorrow. Literary devices such as onomatopoeias, and visual imagery were very well utilized to enhance the action happening in the story. With Voldemort on the rise, and Snape becoming the DADA (Defence Against the Dark Arts) teacher, the book opens a whole new realm of possibilities for Harry and the magical world that Harry was part of, something that cannot be missed by any Harry Potter fan!

Even though the book is very lengthy (as most Harry Potter books are) it’s worth a read.

Despite all the positives, I do feel that a few things in the story could have been avoided.

For example, I certainly did not want Albus Dumbledore to be murdered as this was an event that really saddened me. Also, I did not like the fact that Snape became the DADA teacher in Harry’s 6th year. However, I do understand that the author, JK Rowling, must have included these events as part of the plot for a reason, which to my mind, should get revealed in the last book of the series.

Despite my above 2 suggestions, Harry Potter and the Half-Blood Prince is still an excellent and incredible book. Contrary to all the action, mystery and adventure, the book teaches us useful lessons, which include to always value true friendship, never, ever give up in life and keep fighting!

If you are a fantasy fan, or believe in magic and its stupendous power, then this book is for you.