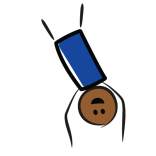 Countless smells spun and rose in the hot, humid air. Wiping his brow for the umpteenth time that night, King Vikramaditya thought that the shape of the hanging corpse was a welcome sight. Tadak, padak, his footsteps on the hard ground felt loud to his ears, but he lumbered on.

Not too long after, the grinning vampire rested on Vikram’s shoulders, and he was on his return march. He counted his steps, nine, ten, before he heard the familiar voice speak from the corpse. “King Vikrama, you some regularly to the graveyard to take me back, all on the say of the hermit. But have you considered what kind of a man asks another to do this kind of errand for him? Do you know if he truly means well? Can you recognize when someone is truthful or not? Let me tell you the story of King Mahendra and his quest for an honest successor. There may be a lesson there for you.”

And so the vampire began his story!